Gateshead Are Off To Wembley!

Gateshead FC could be promoted to the Football League - if they can get past Cambridge in the play-off final at Wembley.

Gateshead captain Ben Clark can't wait to lead the side out.

He told Gateshead-fc.com
"I've had some good times in the game; international youth games, playing for Sunderland and winning promotion at Hartlepool, but this tops the lot.

It is definteley the best - 100% - because of the dressing room. We're an honest bunch of lads who work really hard, and the camaraderie we've got is second to none."

Meanwhile, defender James Curtis was meant to be marrying his fiancée Charlotte on Sunday.

He's had to postpone his big day though to walk out at the famous Wembley Stadium.

He told Capital:
'The new gaffer came in and we started winning an climbing the table.

I was getting a bit worried, so we made the decision to move the wedding back 3 days.

Charlotte was fine though, she's laid back just like me.

And she's getting a day out at Wembley too!'

They'll be getting hitched on Wednesday instead!

Meanwhile, police are telling any fans travelling to Wembley to stay away from trouble.

16 people were arrested after disorder at the Gateshead v Grimsby football match on the 4th of May.

Detective Inspector Andy Fairlamb from Northumbria Police said:
"We want to make people aware that anyone found causing disorder at football matches in our area will be identified and dealt with.

We are also liaising with our colleagues in London ahead of this important match for Gateshead to prevent any problems occurring.

We know that this is a big game for one of our local teams and we don't want the bad behaviour of a few to mar what will be a great sporting day out for many true supporters." 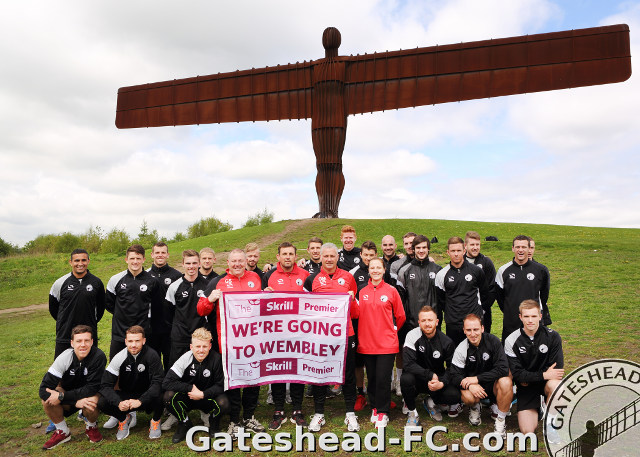