For a second year running Capital FM have been confirmed as partners with Newcastle City Council to switch on the 2013 Christmas lights along Grey Street!

Bodg, Matt and JoJo will once again be your hosts for the evening and will be joined on stage by Ex Newcastle United legend Steve Harper!

After an emotional final year with Newcastle United and raising over £325,000 for charity, Steve will be our special guest to mark the start of the Christmas celebrations for Newcastle City Centre by switching on the lights which will illuminate Grey Street! 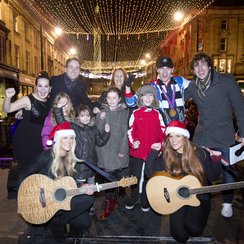 Also attending the switch on and joining Bodg, Matt and JoJo on stage will be vocal girl group Scarlet Street with festive sing along songs for everyone to join in with, Lord Mayor of Newcastle, Cllr Margaret Wood and the winners of the annual Children's Christmas Light competition.

Get down to Grey Street on Thursday 21st November from 5.30pm to join us all to watch the city centre light up with festive joy!