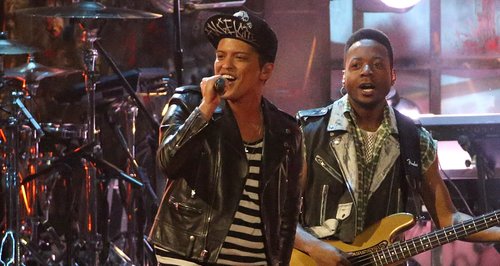 We can't believe it's been 12 whole months since the last BRIT awards, Tinie Tempah high-fiving a royal and getting the first glance at Miley's INSANE tour!

Not just content with his OWN BRIT Award, Sam Smith is backing his mates too!

Back in 2014, Sam Smith (quite rightly) picked up the BRITs Critics' Choice, and we fell in love with his silky vocals. But even before we'd heard his solo tracks play on Capital, we were loving him for Disclosure's dance track 'Latch'. Sam was adamant that Guy and Howard Lawrence deserved to win all four of their nominated awards.

There was DEFINITELY love in the air, as those 5 Seconds Of Summer boys were wishing One Direction luck, too!

It's hard to believe that just a year ago, we'd never even heard the boys play 'She Looks So Perfect' at either of our Balls, or seen their amazing music videos - but Ashton, Calum, Luke and Michael HAD been touring with One Direction! The two bands clearly got on like a house on fire, as the Aussie lads were gushing about how great their UK counter-parts were during their first ever trip to the Capital studios.

During the event red carpet, there was definitely at least one 'OMG WTF?" moment...

And that moment came from none other than Clean Bandit! The only girl in the group, Grace Chatto, definitely made an impression with her rather 'unique' fashion accessory - a clear handbag with a goldfish swimming around inside it... as you do!

But it was all about the ceremony itself, with some STELLAR performances!

There were joyful winners and A-list performers aplenty at last year's event in London's O2 Arena - with the likes of Katy Perry and Beyonce taking to the stage. ALL of the performances were INCREDIBLE - you can watch them here - but we still have a just soft spot in our heart for Bruno Mars, and his 'Treasure' routine was simply flawless!

Away from the BRIT Awards, the Britons were STILL doing us proud at events ceremonies

The BRITs aren't the only event in the British entertainment calendar in February - we can't forget the BAFTAs! Well, especially not after Tinie Tempah managed to high-five Prince William!

We were BUZZING over the prospect of Nicole Scherzinger and Lewis Hamilton getting MARRIED!

The rumour-mill was strife with reports that the former Pussycat Doll and the Formula 1 champion were going to tie the knot last February. Maybe with hindsight we shouldn't have got our hopes up...

And don't forget the days when we were still a little bit surprised by what Miley Cyrus got up to...

Just 12 short months ago we'd still not recovered from THAT twerking incident with Robin Thicke. Or what she decided to smoke on stage. Or the video for 'Wrecking Ball'. Or... well, you get the idea. Miley was DEFINITELY a huge talking point of 2014, so when her 'Bangerz' tour kicked off, we knew we were in for a treat.

What was rocking your world last year? Get involved on Twitter @CapitalOfficial using #WayBackWHENsday!