Little Mix are marking the start of their brand new chapter as a three.

Perrie Edwards, Leigh-Anne Pinnock and Jade Thirlwall are embarking on the next era of Little Mix as a trio, after bandmate Jesy Nelson quit in December 2020.

After announcing their new single ‘Confetti’ featuring Saweetie will be released on 30 April, the band did what all girls do when a new chapter begins; changed their profile pic.

With a brand new photo of Perrie, Jade and Leigh-Anne in matching black outfits, the girls pulled their best Blue Steel.

Leigh-Anne looked epic in a patent leather blazer with matching trousers while Perrie also opted for leather, wearing a long-sleeved jumpsuit with her high heels.

Jade picked a tailored blazer dress with silver beading, posing with her hands in her pockets for the serious snap.

They captioned it: “Patiently waiting for April 30... #NewProfilePic.”

Perrie teased way back in February that they had a new song and music video on the way, so we’re hoping the MV isn’t too far off either. 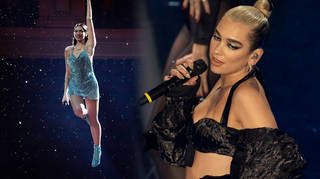