We're not sure what to think of this, to be honest.

According to one bar in Brooklyn, New York, Kendall Jenner failed to tip her waiter on a $24 bill.

The bar has posted an alleged copy of Kendall’s supposed receipt which is signed by the reality star, but the tip section has been left blank. 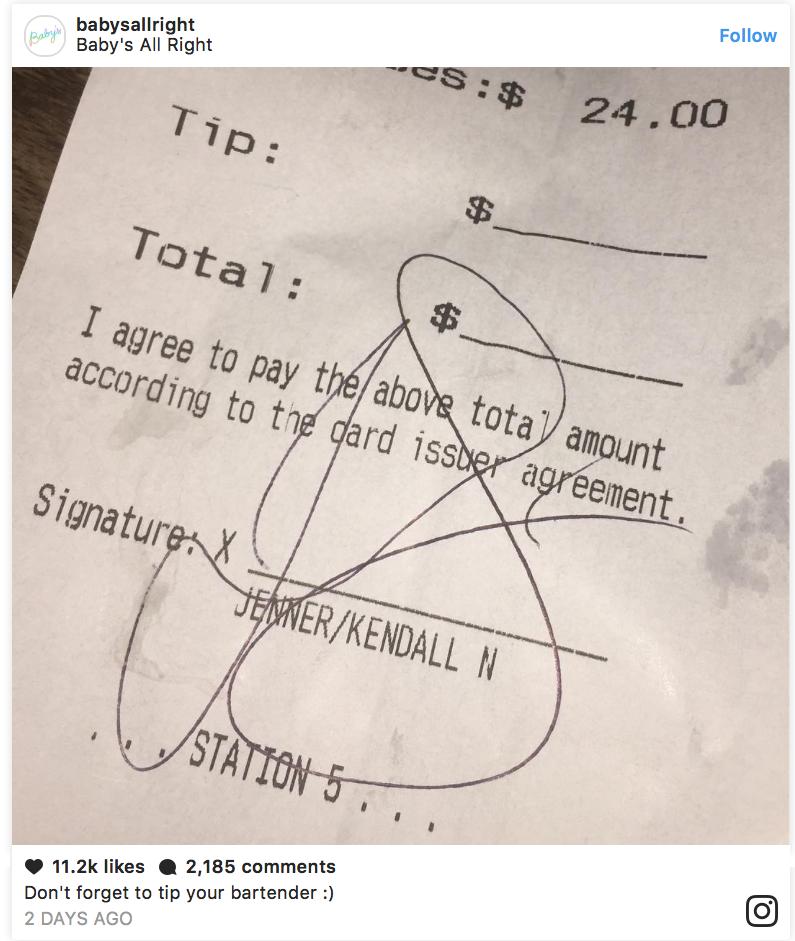 The Instagram post is accompanied with a simple caption with reads, “Don’t forget to tip your bartender :)” and it’s cause quite a stir.

It's probably important to note that tipping is not mandatory, though often much appreciated by the waiting staff and is normally a good gesture if that service has been top notch.

However, whilst no one knows if the receipt is 100% legit Jenner, social media users have been quick to take sides and either judge Jenner or slam the bar for posting the photo in the first place.

Some fans have called Kendall "cheap" for not tipping with others responding that they themselves were a "bartender and we lived off of tips. Come on now".

Others, however, have taken Jenner’s side by commenting that “whoever posted this should get fired” and have deemed the move “unprofessional”.

It's a sad world.... Your own fans work in the service industry and you can't leave a tip for a $24 tab!!!! #yourworthless @KendallJenner https://t.co/Bs9syCiPZ6

People idolise @KendallJenner yet she doesn't even leave a tip on a $24 dollar bill. (Min wage for bartender in US is £1.63) SKINT MEFF

People bashing Kendall Jenner for not give a tip to a bartender as if other celebrities or their idols never did it before.

Really!? CUSTOMERS ARENT OBLIGATED TO LEAVE A TIP!!! Not even @KendallJenner I seriously can not stress this enough. pic.twitter.com/Y4jhstkLu2

However, some fans have pointed out that according to Forbes, Kendall Jenner is worth $17 million, so they reckon she could probably afford a 20% tip on a $24 bill.

But now it seems that Kendall herself has had enough of the rumours and has taken to Twitter to put the story to bed once and for all.

Writing, "Damn, I guess next time we won't tip in cash", Kendall made sure to put the story to bed once and for all: she did tip, she just tipped in cash, thus why it did not show up on the card/tab receipt.

damn, i guess next time we won't tip in cash https://t.co/iZ4tFt3pg7

In lighter news, remember when Kendall Jenner fell off her bike?