VOTE: Can Justin Bieber Actually Make It FIVE Consecutive Weeks At No.1?

With 'Cold Water' and 'Let Me Love You' both spending time at the top, JB is on an epic chart run right now. How long will it go on?

DJ Snake's collaboration with Bieber has taken the chart by absolute storm since it knocked 'Cold Water' from pole position, however that doesn't mean it can't be taken out itself at any point.

The Chainsmokers, Olly Murs and Major Lazer have been knocking on the door for a couple of weeks now and it seems like only a matter of time before they get their own slice of glory.

DJ Snake's surprise single with Biebz hasn't budged from it's current position since it was released two weeks ago. That doesn't mean it will walk to victory once again this Sunday; there is a whole pack of tracks ready to fight for leadership.

You just can't count a former Vodafone Big Top 40 No.1 out of any chart race, especially when the track is as EPIC as this. 'Cold Water' has only ever occupied No.1 and No.2 thus far. Is a return to the top inevitable?

Olly Murs' 'You Don't Know Love' climbed an incredible 16 places in the space of a single week on Sunday. If he can do that literally out of nowhere then surely he can leapfrog a few tunes to grab the top prize right?

The Chainsmokers are owning 2016 in a very big way. First 'Don't Let Me Down' peaked at No.2 and now 'Closer' featuring Halsey is taking it to the top tracks as they currently sit at No.4 going into Sunday. 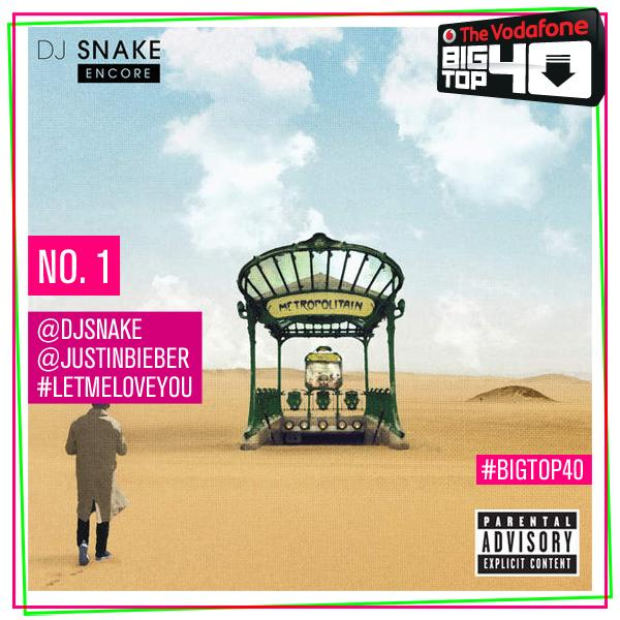