The Best Music Parody Videos Of 2014…So Far 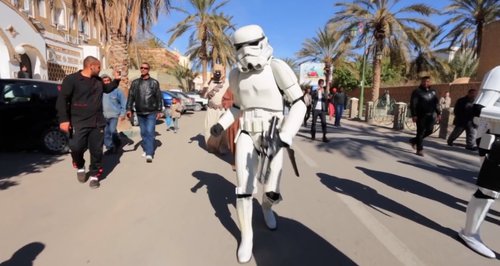 We've already been treated to some hilarious clips this year.

2014 looks set to be one of the best year's yet for musical parodies.

In 2013, we had a great number of 'Wrecking Ball' mock ups as well as Seth Rogen and James Franco's impression of Kanye and Kim.

This year there's been Star Wars taking on Pharrell's 'Happy' and a Uni student taking on Macklemore's 'Thrift Shop' for a campaign like no other.

With just a few months down, what else does the year have in store for us?

Check out the best parodies of 2014 so far below…

1D, Robin Thicke And A Host Of Celebs "Talk Dirty'

Jason got all his famous friends to help out and record something special to accompany his recent smash hit. One Direction's moves are something else…

If Katy Perry's 'Dark Horse' Was A James Bond Theme

Pharrell might have the most uplifting track of the past 12 months, but what if things took a turn for the worse?

A student from the Royal Holloway University decided to gather support for his campaign to become Sports and Development president with this nifty video. He'd get our vote after this....