Missed the MTV VMAs? Check out all the best performances from the night, right here!

The MTV VMAs are famous for the incredible outfits, but even more so for the UNBELIEVABLE performances - and 2016 saw the likes of Rihanna, Britney Spears, Nicki Minaj and more grace the stage.

Whether you missed it live, or just want to relive the night all over again, you can check out the best live performances right here:

RiRi opened the show with a brilliant megamix including her hit songs 'Diamonds', 'Please Don't Stop The Music' and 'Where Have You Been' in a bubblegum pink outfit complete with a team of dancers - and what a way to open this HUGE show!

Ri's second performance started off with 'Rude Boy' with a cheeky sample of Mr Vegas' 'Heads High' before heading into her newer songs including 'Work' for a seriously filthy medley - and she brought her own underground dance party to the VMAs stage! 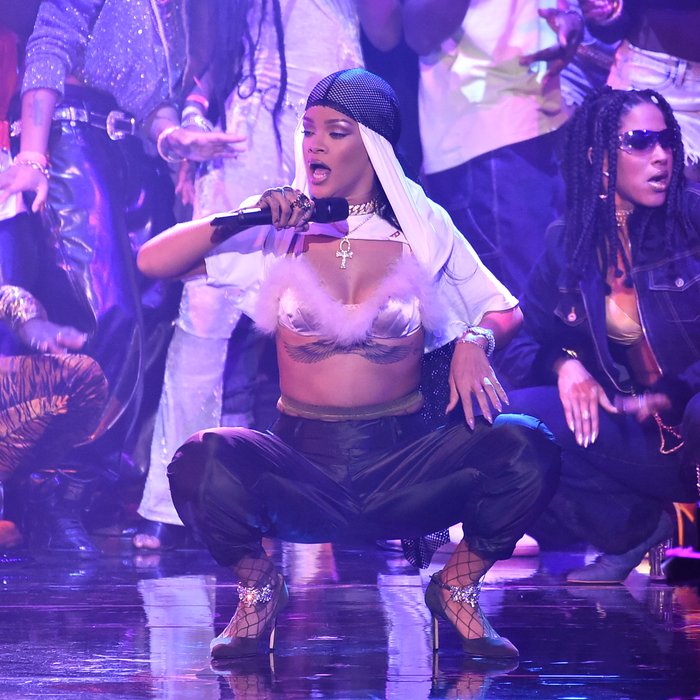 Rihanna pared it down for her third turn on the stage, starting with 'Needed Me' before segueing into 'Pour It Up' and inviting her HOT troupe of dancers back for a twerk-fest! Of course, she had to get 'Bitch Better Have My Money' into her set - which went down a storm with the star-studded VMAs audience.

Rih closed the show with her fourth and final performance of the night, picking off with the soulful 'Stay' before launching into 'Diamonds'. It was by far her most stripped down performance of the evening, but it proved yet again exactly why we love Bad Gal RiRi!

Beyonce was a last-minute addition to the bill, with her performance being kept secret until the day, but OBVIOUSLY she totally slayed with her live performance of 'Pray You Catch Me', 'Hold Up' and 'Sorry' in her signature dramatic, theatrical style.

Ari and Nicki performed their joint track 'Side To Side' - and it's no mean feat to start off your performance on an exercise bike like Ariana! Ari's brother, Frankie Grande, was on his feet and dancing the full way through - and we're not surprised with this FIERCE performance!

.@ArianaGrande & @NICKIMINAJ slaying "Side to Side" at the #VMAs https://t.co/JNj274hXNS

Britney was introduced onto the stage by none other than Kim Kardashian, and proved exactly why she's a VMAs stalwart with her stunning performance. Britney brought out G Eazy for their duet of 'Make Me' - and the pair put on a VERY saucy performance!

Nick gave us serious #BreakfastGoals with his performance of his new song 'Bacon' - live from a restaurant themed set! If there's anyone we'd love to cook us a nice bacon sarnie, it's definitely Nick!

Thank you @MTV #VMAs! Awesome time performing Bacon with @tydollasign. Shoutout to this crew for being a part of it. pic.twitter.com/OG9ABuWGXt

The Chainsmokers and Halsey

The Chainsmokers and Halsey teamed up to perform their hit song 'Closer' - and boy did they live up to the song's title...!

Lukas Graham performed their brand new song 'Mama Said' at the VMAs and got everyone in the mood for the night ahead in true style.

Alessia and Troye teamed up for the preshow and performed a stunning medley of 'Wild Things', 'Wild' and 'Scars To Your Beautiful' - and now we kind of wish they would release it!