Catch all the MUST-SEE performances from one of the biggest nights in the music calendar.

From Rihanna to Justin Bieber - all the BIGGEST stars in music were on hand for the BRIT Awards 2016 tonight (24th February) to wow us with some truly incredible performances.

BRIT Awards 2016 Winners: See The Full List Of Who Won BIG At The BRITs

Coldplay - 'Hymn For The Weekend'

Coldplay kicked off this year’s show with an INCREDIBLE performance of their latest track ‘Hymn For The Weekend’, bringing the whole O2 Arena in London to their feet, and rounding off their performance with a shower of confetti.

Next up Justin Bieber took to the stage - WITH last year's Critics' Choice winner James Bay - to bring his INCREDIBLE single 'Love Yourself' to life! 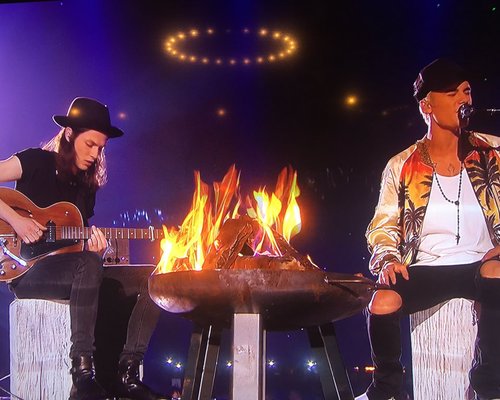 Justin sounded PITCH perfect throughout the performance, with 'Hold Back The River' singer James Bay backing him up on guitar. When Justin started hitting the high notes EVERYONE in the O2 Arena went crazy!

Next up Justin dashed off stage and kicked into his HUGE Vodafone Big Top 40 number one single 'Sorry' - performing in front of games and backed up by some SERIOUSLY sexy dancers.

Jess Glynne then gave an INCREDIBLE medley performance of hits - from 'I Know' and 'Don't Be So Hard On Yourself' to her AMAZING hit 'Hold My Hand'.

Next it was time for British Male Solo Artist winner James Bay to hit the stage for an anthemic rendition of his breakthrough hit single 'Hold Back The River', leading the entire O2 Arena crowd in a massive sing-along.

From winning the Critics' Choice in 2015 to an amazing performance just now - what a year for @JamesBayMusic! #BRITs https://t.co/VumLkNiCi9

Next on stage was Rihanna - with the Queen returning to the BRITs to bring 'Work' to life, fresh from the HUGE surprise launch of her album 'ANTI'.

The moment EVERYONE went crazy for though was Drake arriving for a surprise due with Rihanna on the track. This was BIG!

Look who just made a sneaky appearance on stage with @rihanna ...it's only @drake! #BRITs https://t.co/nSQvcXi1tD

Little Mix were the next performers on the night, heading out and bringing their HUGE 2015 number one single ‘Black Magic’ to life - with an extended - and amazing - remixed intro.

The singer took to the BRITs stage at London’s O@ Arena to give a moving tribute to the late David Bowie, after an introductory speech by Annie Lennox and actor Gary Oldman.

The star sang ‘Life On Mars’ and got a huge ovation from the crowd to round off the performance.

The Weeknd - 'The Hills'

The phenomenon that is The Weeknd put on an epic performance for his recent hit single 'The Hills', showcasing that incredible voice he's become known for on full show.

Adele - 'When We Were Young'

For the FINAL performance of the night it could be NO ONE else to round off the show - the Queen Of The BRITs - Adele took to the stage to perform her '25' single and end the ceremony. Just, wow!

The amazing @Adele performs "When We Were Young" #BRITs https://t.co/0BYzyDM3Ao