From Kanye taking over the local Nando's to an award being presented from SPACE... these things could ONLY happen at the BRIT Awards!

The BRIT Awards is one of the biggest nights in the music calendar, and there are ALWAYS amazing performances... but one thing the BRITs does better than any other is provide those amazing moments you just wouldn't get anywhere else.

Let's take a look, shall we?

Who Are The BRIT Awards Nominees For 2019? Ariana Grande, Little Mix And The 1975

Cast your minds back to 2017 when British pop rock band The 1975 dominated the BRITs - and our television sets.

While people at the event were oblivious to the takeover, viewers at home were FTFO as negative quotes about the band interjected their performance of 'The Sound'.

People flocked to Twitter asking if the band's performance had been hacked, while fans of the band pointed out The 1975 had purposely incorporated bad press they'd received over the years as a way of sticking two fingers up. Drama!

Adele won the coveted Best British Album award back in 2012, fresh off of getting six Grammys in the USA... but the producers wouldn't let her finish her speech as they needed to get Blur to perform and couldn't over run. Booooo, producers! Let Adele speak!

Madge was performing 'Living For Love' while wearing a dramatic cape which was supposed to be pulled off by her dancers... except the cape malfunctioned and didn't undo, leaving Madonna to be dragged backwards down some stairs by her neck. OUCH! However, Madonna carried on like the trooper that she is, and finished her performance like nothing ever happened. Trooper!

Little Mix celebrated their BRIT Award win in 2017 by having a drink (or six...)

The girls won their first ever BRIT in 2017, and it's safe to say they were a little merry when they did their winners' interview. Their total down-to-earthness is just one of the reasons we love them so much, but you just know they wouldn't have been able to get away with this at any other awards show!

... it's gone down in history, and been a staple Halloween costume choice ever since. Now THAT's how you make a fashion statement! 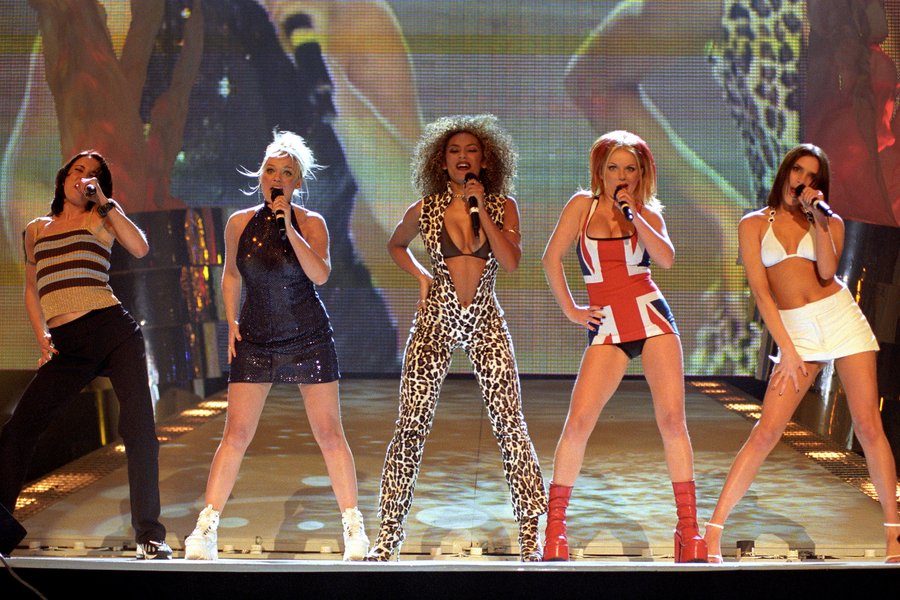 Is there anything more random than global superstar and controversy king Kanye West turning up to the Nando's restaurant at London's O2 Arena ahead of the BRIT Awards and pretty much shutting the whole place down? No. No, there is not.

This is jokes RT @Queenrachh SOOOO BASICALLY I JUST SAW KANYE GETTING A CHEEKY NANDOS pic.twitter.com/mLI9CpwXUf

Where else would you get a message live from SPACE?! Tim Peake congratulated Adele with a video link from the International Space Station during 2016's show, in what has to be a first for any awards show!

It's fine it's not like you're presenting an awards show to millions of TV viewers... oh wait! There's always time for a selfie when Kim Kardashian is around, after all!

In 2003, Justin Timberlake could NOT keep his hands off Kylie Minogue's famous bum!

Way before Kylie Jenner and the Kardashians were even a thing, there was another Kylie with a world famous bottom - and Justin got the world talking when he made the most of their on-screen appearance to give it a good old grab!

Harry Styles almost missed out on picking up his award with the rest of One Direction in 2014 - as he was in the loo!

The rest of the band had to go up and collect the award without Harry - who JUST managed to run on stage in time. The reason for his lateness? "I was just having a wee and the toilets are ages away!" Oh Hazza, never change!

The Pulp star jumped on stage and mooned the crowd before quickly being dragged off the stage - not quite the spectacle MJ was hoping his BRITs performance would be remembered for!

Justin Bieber performed at the 2016 awards with James Bay

They're not two people you'd have thought would have much in common, but the Biebs and the Bay put on one of the most beautiful performances of the evening.

The rumoured on/off couple certainly had chemistry when they bumped and grinded their way through their 2016 performance of 'Work' at the BRITs - with the low lighting and THOSE moves, it was definitely a performance to remember!

> Download Our Brand New App For All The Latest BRITs News