Four men have been jailed for more than 22 years between them for their parts in an attack on a 17-year-old boy at a party in Nottingham.

Five attended a party in Bestwood on September 15 last year along with a 17-year-old boy.

During the evening, they forced the boy to strip naked and humiliated him while threatening him with a knife.

They also used his tie to restrict his breathing and blocked him in the kitchen during the ordeal. 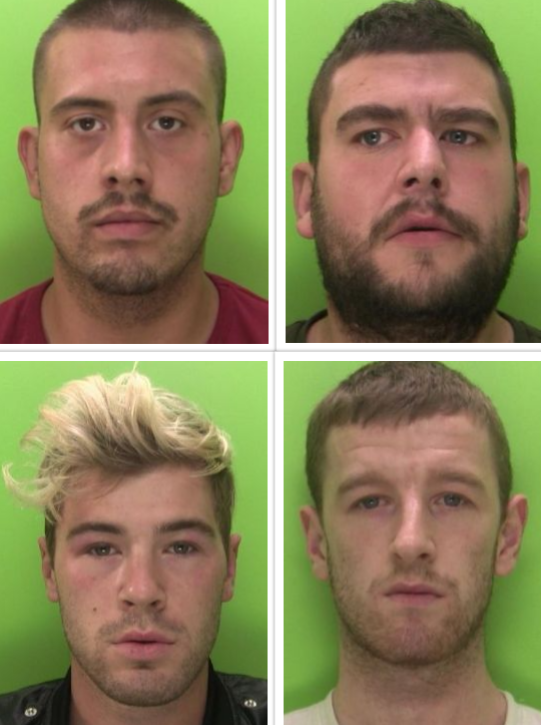 Whelpton was jailed for 12 years and nine months after pleading guilty to grievous bodily harm with intent.

A fifth man, Jake West, 25, of Widecombe Lane, Clifton, was given a three-year community order after pleading guilty to false imprisonment.

In the early hours of 16 September, Whelpton sent a video message to the ex-girlfriend of a male acquaintance which showed the boy having boiling water poured on him and being punched and kicked, before threatening the girl saying: "This is what happens when you grass."

Throughout the night, Whelpton also urinated on the boy and stabbed him repeatedly.

The boy sustained significant burns to the left side of his body and was left with cuts and bruises across his upper body and face.

He was taken to hospital the following morning and sent to the burns unit due to the extent of his injuries, where he needed to have surgery.

During his initial interview, he told officers he felt like he had been tortured.

All five men initially denied any involvement in the attack. However, officers discovered nine separate videos of the assault on a mobile phone and text messages about the incident on other phones.

DC Nathan Bingham said: "This was a horrific case where the five men used threats of violence and fear to humiliate a vulnerable young man.

"The victim in this case needed to undergo surgery due to the severity of his burns and will no doubt struggle with the emotional and physical impact of that night for many years to come.

"The only redeeming feature in this case is the fact that they eventually pleaded guilty and didn’t force this young man to relive his ordeal in court.

"Their behaviour was abhorrent and I am glad the court has recognised the seriousness of the offence in the sentences."