Police have broken up a 'complex web' of drug networks in Nottingham after jailing 5 dealers for 25 years.

All the men had something to do with supplying class A drugs in the city and between them, they managed to get hold of cocaine worth about £100k.

The details of the drug deals were found in a book, showing they got them from contacts in Brighton and Eastbourne.

The men were from Carlton, Mapperley and St Anns.

The five were all targets of East Midlands Special Operations Unit (EMSOU) Operation Lineal, so far, 20 people have been jailed for almost 170 years.

'Today's sentences are the culmination of a long and complex police investigation led by EMSOU on behalf Nottinghamshire Police and its neighbouring forces in the East Midlands.

'What we uncovered was a web of drug dealing activity, which put the most dangerous and addictive controlled drugs into communities in Nottinghamshire and beyond, and involved the exchange of large amounts of cash between those involved.' 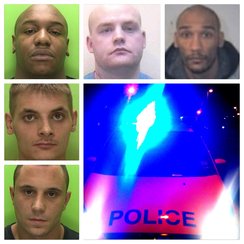