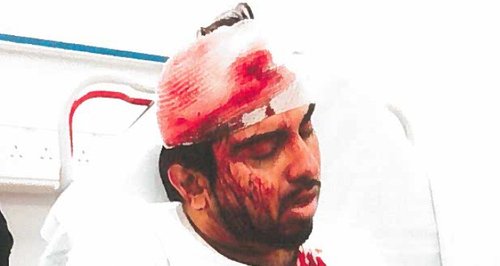 Police have released a pitcure of a man badly beaten with a baseball bat in Birmingham.

Officers hope it encourage someone to come forward with information after 27-year-old Jamil Ahmed was attacked in Sparkbrook before Christmas.

Jamil was walking along Ladypool Road on the evening of 15 December last year when he was set upon by three people in masks.

He was left with a bleed on the brain and was in hospital for more than two weeks before finally being allowed home on New Year’s Eve.

So far police say they haven't been able to find out who the attacks are or why they attacked him.

Investigating officer DC Michelle Akers, said: “This was a targeted attack, nothing was stolen and it appears Mr Ahmed has been assaulted by someone with a grudge against him, but precisely what’s prompted it remains unclear.

“There can be no justification for an assault of this nature. It was a cowardly attack by three people, armed with baseball bats and with their faces covered. Mr Ahmed stood no chance of protecting himself and has been left with lasting physical, emotional and psychological scarring.

“This has happened during a busy time of day on Ladypool Road in full view of members of the public. Somebody must have seen something, or suspects who is involved, and I would appeal to their consciences to come forward with information.

“They can speak to me in confidence or they can call Crimestoppers and provide information anonymously."

Mr Ahmed - who’s been unable to return to his restaurant job due to his injuries - was in Ladypool Road at around 6pm on December 15 when the attack happened.

A police trawl of local CCTV cameras reveals one offender wearing a black face covering, gloves, a long-sleeved grey top, and grey Adidas tracksuit bottoms with light blue stripes on the side of the legs.