Officers have released images of two men who threatened staff with a handgun and stole money from Ladbrookes at the Scott Arms Shopping Centre in Great Barr.

There was also a third man involved in the robbery, who stood at the entrance and is not captured on CCTV during the raid, which took place on July 15 around 5.40pm.

The offenders stole over £1,000 from the tills before escaping. 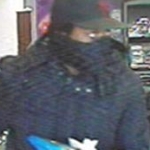 The offenders are described as three black men in their early 20s, all wearing dark hooded jackets. One wore a skin tight mask below his eyes and another wore a dark coloured face mask.

Police are continuing to investigate the robbery; one man has been arrested and bailed in the connection with the offence while enquiries are ongoing.