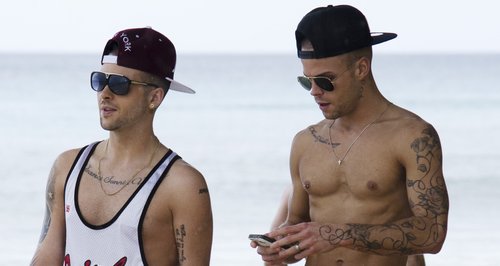 The 'Beautiful Life' singer took a holiday to Barbados alongside his future husband.

Union J's Jaymi Hensley and his fiancé Olly Marmon enjoyed a romantic holiday out in Barbados this week, fresh from confirming plans to marry before the end of the year.

The 'Loving You Is Easy' singer revealed earlier in January that he and Olly, who have been engaged since 2010, have moved up the date of their wedding to around December time this year.

Jaymi and Olly were pictured enjoying a stroll along the beach on Monday (27th January) in Barbados, as they made the most of Jaymi's rare time off.

Check out a snap of the pair together below (Credit: Splash):

"On the way to the airport gonna go catch some rays in Barbados with my boy!" Olly tweeted before the pair caught their flight, while Jaymi later added: "Happy holidays :) perfect start @Olly9191."

Fellow Union J star George Shelley was also pictured jointing the pair on their Caribbean getaway this week, as the band prepare to begin work on their second studio album.