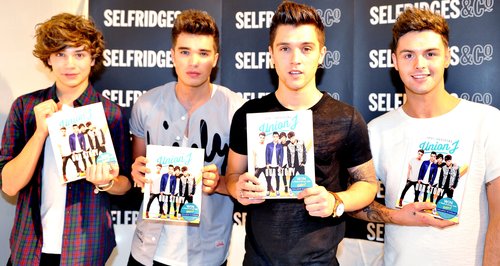 The 'Beautiful Life' four-piece have been meeting their JCats all week at various signing events.

Union J have celebrated the launch of their brand new book with a series of signings up and down the country.

The 'Carry You' four-piece recently published their first biography Union J: Our Story, and made sure to give fans a personal touch by signing copies at events across the UK.

The boys were pictured at a WH Smith signing in Liverpool on Monday (21st October) to meet and greet with some of their biggest fans, as well as launching the book in Selfridges recently.

The book covers the band's upbringing and younger days as well as their meteoric rise to fame on The X Factor UK last year, leading up to the launch of their first single 'Carry You' earlier this year.

Check out a picture of Union J launching their new book at Selfridges this week below:

This past weekend Union J launched their second single 'Beautiful Life' which made it into the top five of the Vodafone Big Top 40 less than 24 hours after release.