The couple are now in a relationship and the US star was full of praise for her boyfriend's vocals.

Ariana Grande has spoken about how her and boyfriend Nathan Sykes' duet 'Almost Is Never Enough' came about and praised The Wanted' star's "vocal gymnastics".

The feature was recorded before the pair began their relationship and manager Scooter Braun takes all the plaudits.

"Our manager Scooter Braun emailed me and said: 'Check this out'. Nathan killed it," she told the Daily Star. "I had to go back in the studio and sing more because he came in and did these vocal gymnastics and took it through the roof."

The song features on the female star's debut album 'Yours Truly'.

"I was like: 'This is my album, boy'. We didn't even meet until after that. But then we were both at an event and made eye contact and I thought he was really cute," she added of what first attracted her to the boyband singer. 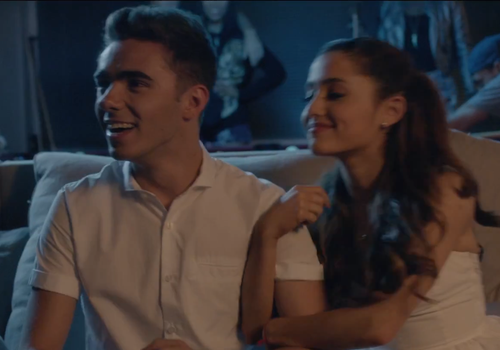 Ariana also recently opened up to Capital about meeting Nathan's parents for the first time as well as life in the public eye.

Meanwhile, The Wanted were seen on TV screens this weekend as they performed new single 'Show Me Love (America)' on The X Factor.