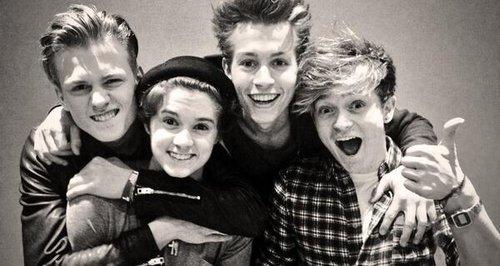 The 'Wild Heart' four-piece celebrated their win in between hanging out with Taylor Swift and Ed Sheeran on tour.

The Vamps have been named winners of the MTV Brand New for 2014 prize and celebrated while touring alongside Taylor Swift in the UK this week.

The 'Can We Dance' four-piece said they felt "humbled" after fans voted them the winner of this year's award, in between supporting Taylor on her 'Red' tour over the weekend.

"We're very lucky and we feel very humbled and honoured to win such an awesome competition we've been growing up with," band member Tristan revealed fresh from winning the news, while singer Bradley added:  "A big thank you to all our fans who voted for us, you're all amazing."

We are having a blast at the moment with @taylorswift13 . Her family and crew is so welcoming. We are so grateful for this opportunity!

Getting excited for the second night at the O2 Arena with @taylorswift13 ...... LET'S KICK IT!

'Do It All Over Again' singer Elyar Fox made it to second place in the countdown, while Ella Eyre and Sam Smith also ranked highly.

'Wild Heart' band The Vamps also shared pics of themselves enjoying their support slot on Taylor's tour, as well as hanging out with special guest Ed Sheeran.

Lovely to finally meet @edsheeran . One of the nicest guys I've met. pic.twitter.com/3iTOeSxQre

The Vamps are set to support Taylor Swift on her 'Red' tour for the remainder of her UK dates.