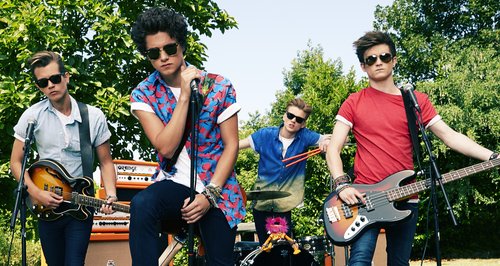 The follow-up to Vodafone Big Top 40 chart hit 'Can We Dance' will get it's first play on Capital Breakfast this Monday (November 25th).

The Vamps have announced details of their brand new single.

'Wild Heart' will be released on January 20th 2014, and will get it's first play on Capital Breakfast this Monday (November 25th) at 8am.

The track which is already a huge fan favourite on the the boys' official YouTube channel, will act as the follow-up to Vodafone Big Top 40 debut hit single, 'Can We Dance'.

Bradley, James, Tristan and Connor filmed the official music video for 'Wild Heart' in the desert just outside of Los Angeles. The promo premieres here online next week.

The Vamps were recently confirmed to perform live on night two of the Capital FM Jingle Bell Ball 2013, with Coca-Cola. The pop newcomers will take to the stage alongside the likes of Lady Gaga, Jessie J, and Lawson at London's O2 Arena, on Sunday December 8th.

The event is SOLD OUT but you can enter for your chance to win here.

[[ This video has been removed ]]
The Vamps - Can We Dance on MUZU.TV.