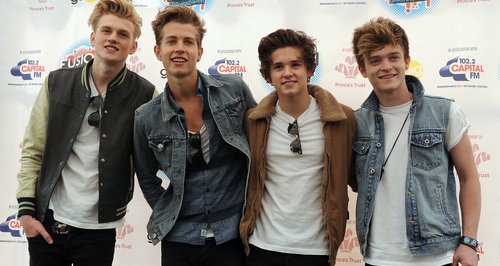 Get ready for the 'Wild Heart' band's debut at the Jingle Bell Ball with some of their best cover videos to date.

The Vamps are set to take centre stage next weekend at the Capital FM Jingle Bell Ball 2013 (Sunday 8th December) at London's O2 Arena, fresh from the release of their recent hit single 'Can We Dance'.

The British four-piece may be riding a wave of chart success right now but Brad, James, Connor and Tristan have been causing a stir across YouTube for over a year now with some truly amazing cover performances.

From putting their own spin on One Direction's biggest tunes to mashing up some Bruno Mars numbers, check out the five of The Vamps' best YouTube covers for a taste of what to expect from their Jingle Bell Ball debut.

1. 'Little Things' (cover of One Direction)

First uploaded by the boys back in November 2012, The Vamps' beautiful cover of One Direction's 'Little Things' is their most successful YouTube cover to date, with over 2.5 million views so far.

The Vamps boys put their own take on Taylor's 2012 hit '22' with a cover filmed back in March this year, and performed inside what looks like someone's living room! Plus it's had over two million views to date.

3. 'When I Was Your Man/Locked Out Of Heaven' (cover of Bruno Mars)

Back in January this year The Vamps paid tribute to pop superstar Bruno Mars with a cover of not one but TWO of his recent hit singles. Kicking off their mash-up cover with Bruno's heartfelt ballad 'When I Was Your Man', the boys bring things to a rousing finale with a Vamps-style take on 'Locked Out Of Heaven'.

4. 'Live While We're Young' (cover of One Direction)

The Vamps show off their musical skills in this cover of One Direction's 2012 hit single 'Live While We're Young'. With over two million views on this cover video alone, the boys have definitely impressed!

5. 'I Knew You Were Trouble' (cover of Taylor Swift)

It's another Taylor Swift for this one... but this cover proves just how talented The Vamps boys are as they put a truly unique spin on the US star's HUGE anthemic single.

Best Of The Rest

Watch The Vamps putting their own spin on some more of the biggest chart hits in recent times below:

The Vamps will next be seen performing live at the Capital FM Jingle Bell Ball 2013 on Sunday 8th December, before the release of their new single 'Wild Heart' on 20th January 2014.