Thousands Of #Vampettes Take Over Mall Of America As The Vamps Storm Up The US Charts! 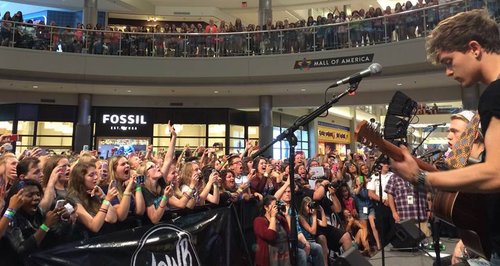 We always knew that The Vamps were going to be HUGE over here, but they are also taking over in the States – they’ve been storming up the charts!

The boys recently hosted a fan event at the Mall of America which saw over 3000 #Vampettes turn up and take over the shopping centre to get close to the boys.

Their debut ‘Somebody To You’ EP has also shot straight into the top 10 of the Billboard Top 200 in the USA as well as going Platinum in Australia.

It’s also managed to stick in the top 20 in Aus for over two MONTHS after it was released – WOW!

But you can all breathe a sigh of relief – the Vamps boys will soon be back in the UK to announce their next single. Phew!