The '22' star can be seen standing proud in an empty arena as she runs through tracks for the opening night of the jaunt.

Taylor Swift can be seen inside an empty Omaha arena as she runs through the final rehearsals for her 'Red' world tour.

The 'Begin Again' star will take to the stage in the Nebraska city for the first of 67 shows tomorrow (13th March) and points to the skies as she runs through tracks for the outing in the newly released image.

The country star will be joined by close friend and British star Ed Sheeran for the duration of the tour.

The pair were recently forced to hit out at claims they have been dating since the BRIT Awards 2013.

Meanwhile, Taylor will also be unveiling the official music video to her new single '22' tomorrow.

Check out a picture of Taylor Swift rehearsing for her 'Red' world tour below: 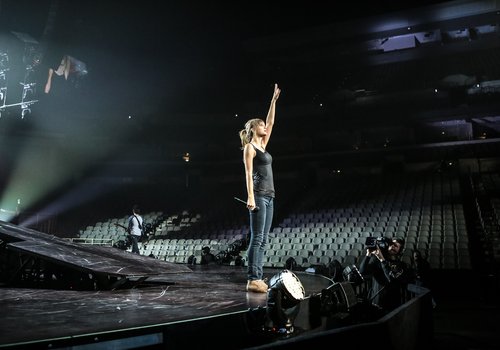 The singer also recently spoke out about her personal life in a new interview with Vanity Fair - revealing the reason for her break-up to Harry Styles and divulged details on her dating history.

She also hit out at "sexist" critics of her music who have portrayed her in the wrong light due to her songs and their subject matter.