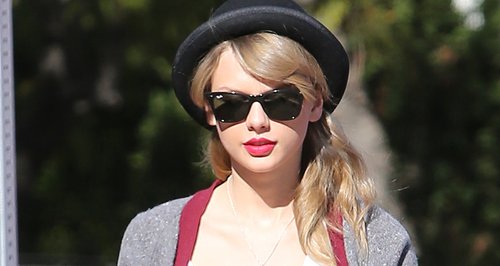 The 'Red' singer teases fans that she might perform one of their favourite songs at the awards show.

Taylor Swift has shared a snap of her rehearsals for the Grammy Awards 2014 this weekend as well as asking fans which song they want her to perform.

The '22' singer is set to give a live performance at the prestigious awards show on Sunday (26th January), as well as being nominated for four gongs in total.

Taylor tweeted this week to reveal she is already rehousing for Sunday's event, as well as teasing which track she will perform on the night.

"Today at rehearsals for @Grammys." Taylor tweeted. "I'm trying to remember… What was the song a lot of you were saying you wanted me to perform on the #Grammys?"

Today at rehearsals for grammys. I'm trying to remember.. What was the song a lot of you were saying… http://t.co/W8JffEbwq0

Fans have since been speculation about which song Taylor might perform at the event, with many suggesting she will sing 'All Too Well'.

Dream comes true is Taylor Swift performing All Too Well on Grammy!

Who else aside from Taylor Swift would sing a fan favorite + non single at the Grammy's?