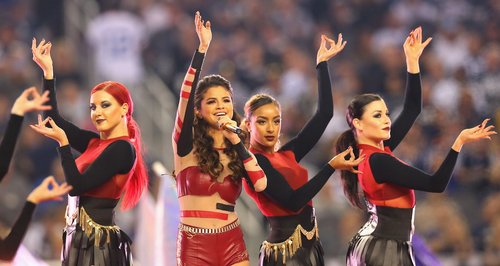 The 'Come And Get It' star wowed in a racy outfit during her performance at yesterday's event.

The US star hit the stage in a racy set of red leather hot pants and matching top as she thrilled those in attendance at the AT&T Stadium.

Selena ran through a medley of her hits, including the recent single 'Come And Get It'.

Her performance also featured an array of backing dancers, with cheerleaders from the Cowboys also getting involved in the performance.

Meanwhile, Bruno Mars will be taking to the field for the halftime show of the NFL Super Bowl next year.

Beyonce reunited with Destiny's Child during her performance at the event earlier this year.