They can sell out arenas, have No.1 singles in the Vodafone Big Top 40 and are all-round music superstars...but Rudimental are still just a lovely bunch of normal lads.

At some point in our lives we've all been on a night out when all of a sudden a Rudimental song blasts through the sound system and the whole place erupts.

We all remember back in 2013 when the boys teamed up with Ella Eyre to play 'Waiting All Night' to a sold out Wembley Stadium right?

In an interview with Digital Spy, Amir revealed, "If you're in it to make any kind of money, go work in a shop because music is not going to make you any money for a long time. You've got to be really really stubborn with it."

Well all the awards and accolades haven't changed the lads one bit! Here's our definitive list of times Rudimental were just a normal group of mates.

1. Feeling on top of the world after an epic gym sesh.

When you finish the gym session with the boys! pic.twitter.com/ulDjXcHz2D

Because there is no better way to celebrate than a classic 'after-gym car team photo'. However they are seriously running the risk of looking like Derek Zoolander and co.

2. They take a LOT of photos of their food...who doesn't right?

Not too sure on the breakfast of choice though...where my croissant at?!

3. They sing their favourite tunes together in the car.

Hmmm it doesn't sound exactly like Disclosure but it'll do.

4. They are glued to the T.V whenever a major football match is on.

A photo posted by DJlocksmith Rudimental (@locksmithrudimental) onMay 30, 2015 at 8:36am PDT

What? Just because we are all about music doesn't mean we don't know about football...um....go...Soccer FC...score some...points...yay football!

5. Speaking of football, they have their own six-a-side team.

Watch out Barcelona...these boys are on form.

6. They are TOO adorable with their kids.

Got to love some classic Dad trolling. #POWER

7. They end up buying random stuff when *ahem* intoxicated.

Went ikea drunk and came back with an elephant! #nofilter

Hang on...you don't need to be drunk to buy a cuddly elephant. EVERYONE SHOULD HAVE A CUDDLY ELEPHANT.

8. They have the exact same Saturday set-up as the rest of us.

This is what my Saturday night looks like! Who's with me! pic.twitter.com/bfsttu3bHg

Okay Amir, this is all well and good but anyone can take a picture of the ingredients. We want the finished product.

10. They post pictures of their shoes. We don't really know why...but we ALL have at some point.

It is air max day! Couldn't help myself

11. They risk drowning their iPad to live out that dream 'TV & Bath' combo.

One day that will be a tv in the wall, but for now this is perfect! #SuperSunday pic.twitter.com/4wiDIxHkM4

This takes a lot of skill people...whenever we try it there are ALWAYS taps in the way, grr.

12. They get a little starstruck too sometimes.

13. And of course, they always have time for a #CheekyNandos.

Yeah DJ Locksmith we see you there!

However we love Rudimental the most when they're entertaining the masses like total #Bosses. 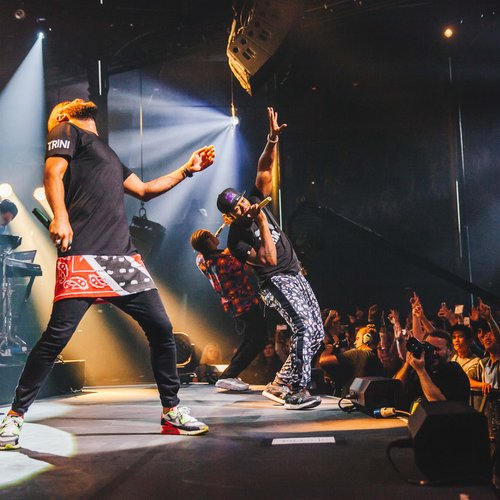