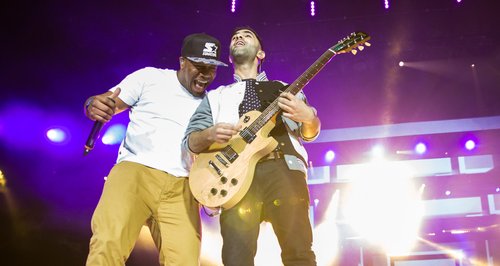 The 'Feel The Love' four-piece made a huge impact with their Jingle Bell Ball set at this year's event, and included a surprise cover.

Rudimental gave an incredible performance at the Capital FM Jingle Bell Ball 2013 including a surprise cover of popular The Fugees hit 'Ready Or Not'.

The UK four-piece kicked off their set joined by Ella Eyre for 'Waiting All Night' to get the Jingle Bell Ball crowd going ready for their set, with BRITs 2014 Critics Choice nominee Ella dressed in black leather trousers and a striped cutaway top.

before Foxes hit the stage to sing 'Right Here' with the group.

John Newman then returned the the Jingle Bell Ball stage after his set earlier in the night to sing 'Not Giving In' with the Rudimental boys, after which they surprised the 16,000 fans in attendance by covering Fugees classic 'Ready Or Not', telling the crowd: "Let me hear you scream!".

To wrap up the explosive set Rudimental united again with John Newman for their massive Vodafone Big Top 40 hit 'Feel The Love'.