The 'Mama Do The Hump' duo will be hitting the stage at Wembley Stadium in June.

Rizzle Kicks will head to the Summertime Ball with Vodafone this June after being announced for the line-up this morning (26th April).

Jordan Stephens and Harley Alexander-Sule join a host of big name acts including Taylor Swift, Robbie Williams and The Wanted on the line-up, which is Capital's biggest ever Summertime Ball bill.

The 'Down With The Trumpets' duo have been making huge waves in the industry over the past two years, with the release of their first studio album 'Stereo Typical'.

The boys have been hard at work on their second record recently, and will be taking to the stage at Wembley Stadium on 9th June.

This year's event is also set to be hosted by Justin Timberlake and tickets go on sale today (26th April) at 8am. 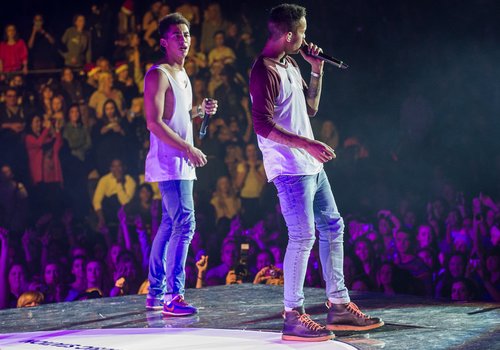