Rixton Bring Some Northern Charm To Their Debut #CapitalSTB Performance 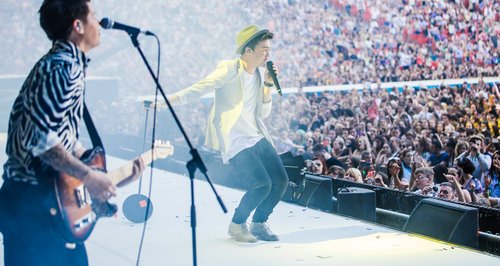 Our favourite Northern lovelies, Rixton, definitely got the female vote at Wembley Stadium.

Our new man crushes, Rixton, may have only recently hit the public eye, but their fan base was already out in force - there were definitely a few broken hearts after watching them being ALL kinds of fine on the main stage at Wembley.

Making their debut Summertime Ball performance in front of a crowd of 80,000, if the boys were nervous they definitely didn't let on. Performing their first single, 'Me And My Broken Heart', the lads from the North put on one hell of a show - definite STAR quality shining through!

Kicking off their performance with a massive "Hello wembley, how are you feeling over there?", the boys were pretty much DEAFENED by fangirl screams. We'd say the were feeling pretty good!

We love a man in a hat, and few can pull it off quite like Jake Roche - the cheeky frontman stole a lot of hearts with his cheeky winks to the females in the crowd. Yep, we spotted you Jakey!

Rixton tweeted their excitement at being asked to perform as one of our Breaker acts:

Who's coming tomorrow? Make a sign if you're cool. A funny one though. More terrible the better.

Me and my LADS pic.twitter.com/GYZgskJTGF

Someone get me Summertime Ball tickets... Rixton, 5SOS, The Vamps and Ed Sheeran. Wow :)

rixton are gonna play at summer time ball, and wow, like, wow, so freaking proud, insane