He helped them get engaged so it's only right Jake and Jesy would have Ed sing at their wedding - if they can afford his fees!

They're one of our favourite celeb couples, and we're probably more excited than they are for their wedding - and Jake Roche from Rixton has dropped a few more deets about his upcoming wedding to Jesy Nelson from Little Mix!

AAA Pass: All The Backstage Action From Fusion Festival 2015

Jake planned the most ridiculously perfect proposal to Jesy by getting Ed Sheeran to sing their favourite song 'Tenerife Sea' while he got down on one knee - and he's revealed that Ed might even sing at their upcoming wedding too!

The Rixton frontman told Capital, "It depends if I can match the figure! He's a great guy so we'll see. I mean he's the nicest man on earth so probably, yes!"

Jake told Capital backstage at Fusion Festival that although he hadn't started planning the wedding yet because he and Jesy were both on tour but the rest of the Rixton boys had already started cooking up ideas for his stag do. 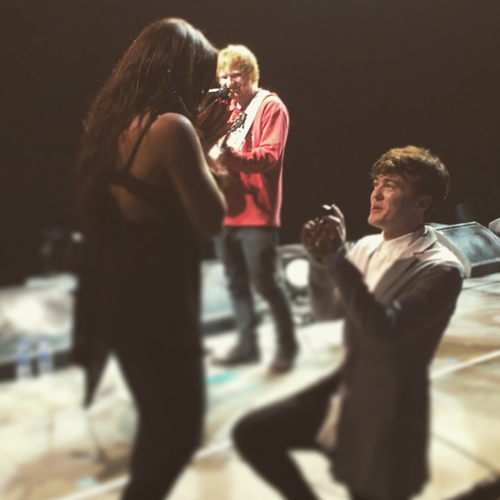 We're keeping our fingers crossed for an invite - it's definitely going to be the wedding of the CENTURY by the sounds of things. (If Jake survives the stag do, that is!)