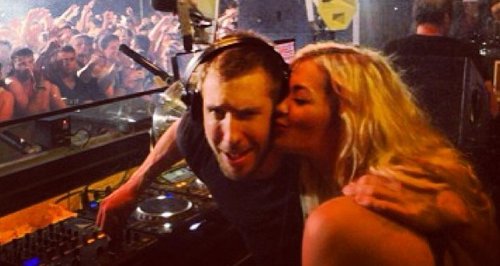 The 'Hot Right Now' singer was having a great time joining her man on stage for his DJ set.

Rita Ora joined her boyfriend Calvin Harris in Ibiza this week and even spent time with him in the DJ booth during a show on the White Isle.

The 'R.I.P.' singer shared a number of snaps of her and a friend hanging out with the 'I Need Your Love' producer during his show at popular clubbing hotspot Amnesia on Thursday evening (4th July).

Among the pictures was one of Rita planting a big kiss on the Scottish DJ's cheek while in the DJ booth during his set, in front of a huge crowd of clobbers.

"Baby," Rita simply posted alongside another snap of her and her friend enjoying the night from right up on the stage next to the 'Drinkin' From The Bottle' producer.

Earlier this week Rita opened up about her romance with Calvin and admitted she is "definitely falling" in love with him, although admitted it is still early for the new couple.

Check out a picture of Rita and a friend on stage with Calvin at the gig below (Credit: Instagram):

Rita Ora and Calvin Harris have been dating for several months after going public with their romance earlier this year.

Rita Ora has promised to be more honest and to "cause a bit of a stir" with her second studio album, expected towards the end of 2013.