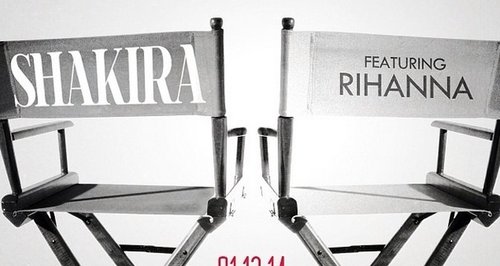 The 'Diamonds' star reveals the official artwork for her new collaboration with 'Whenever, Whereever' singer Shakira.

Rihanna has confirmed that she has teamed up with Shakira for a brand new song called 'Can't Remember To Forget You'.

The 'Monster' singer revealed on Twitter this week that her team-up track with the 'She-Wolf' singer will officially be released on 13th January next week.

Rihanna first confirmed the news after a fan tweeted to leak the news, leading Rihanna to retweet the post before clarifying the release date.

The 'Where Have You Been' singer then unveiled the official artwork for the track, which features two movie-style director's chairs with both her and Shakira's names emblazoned on them.

Rihanna is currently working on a new album expected to be announced later this year.