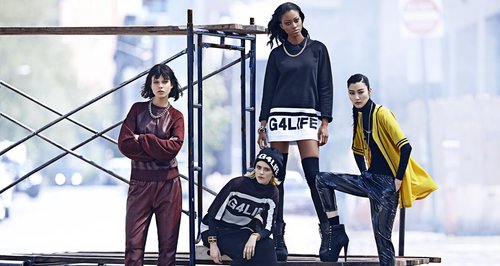 The 'We Found Love' star's 80-piece collection has been unveiled in full along with a behind the scenes video.

Rihanna's brand new second collection for River Island has been unveiled ahead of its official launch next month.

The 'Diamonds' singer has been working on a new 80-piece collection for the UK high street brand, described as a mix of "urban sports lux with sophisticated chic", and full campaign images have now been released.

Rihanna is also seen on set of the photoshoot for her Autumn/Winter 2013 collection in a brand new behind the scenes video that showcases the models gearing up to wear the Bajan superstar's new designs.

"I literally designed everything I want to wear, exactly how I want to wear it," Rihanna reveals in the on-set video. "We're giving it a New York street vibe."

Among the pieces are skirts, jumpers and a range of underwear, many of which feature Rihanna's name as well as the slogan "G4Life", and patterns include camouflage and leather.

Check out some of the new collection from Rihanna For River Island below (Credit: Lachlan Bailey/ River Island):

This week saw the 'Stay' singe reuniting with good friend Katy Perry to support the 'Teenage Dream' star at a pre-release party for her new album 'Prism' in New York City.

Rihanna's new River Island collection for Autumn/Winter 2013 is set to launch with a first wave on 12th September, with the second wave arriving this November.

Go behind the scenes on Rihanna's shoot for her River Island collection below: