Rihanna And Cara Delevingne Planning To Give Each Other Matching Tattoos?

The close friends are rumoured to be planning to ink each other with matching body art.

Rihanna and Cara Delevigne are reportedly hoping to give each other a special tattoo in the coming months, according to fresh rumours.

The pair, who are known to have become good friends in recent times, are rumoured to have decided to ink each other to cement their friendship the next time they are both out in New York.

Speaking to the Daily Star, a source said: "The girls love the idea of giving each other a tattoo. RiRi is used to doing it and has performed dozens.

"She even gave Bang Bang one last year, so is practically a pro," they continued, referring to the popular celebrity tattoo artist. "Bang Bang has now taught Cara how to do it too and has also offered to supervise the girls while they ink each other." 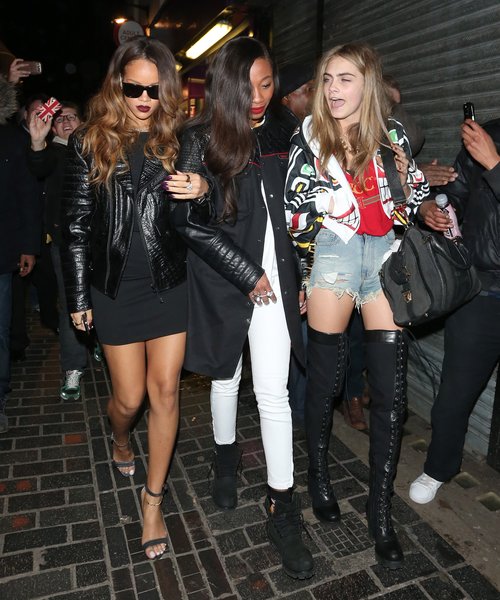 The girls apparently want to ink Hebrew writing on each other when they are both next in the Big Apple.

The source said: "They both want Hebrew writing like Harry Styles and David Beckham, which is very in fashion, and much easier to do than an image. It's all planned for their next trip to New York."

Burberry model Cara got her first tattoo, a lion on her index finger, on her last visit to New York with the 'We Found Love' singer.

Rihanna is currently out on her 'Diamonds' world tour and is now in Paris, France.