The 'You Da One' star was joined by the supermodel for their vacation in the south of France.

Rihanna and Cara Delevingne were pictured on board their luxury £300,000 yacht this weekend as the sail around the south of France.

The 'We Found Love' singer is close friends with the supermodel and were seen laughing and joking around with one another.

The pair also took in some watersport activities by getting pulled around on rubber rings by speedboats and taking to some jet skis.

Both stars were rocking the swimwear as Cara opted for a graphic print two-piece and the Bajan singer going a one-piece black swimsuit and backward turned baseball cap.

Check out a picture of Rihanna and Cara together on their yacht below: (Picture: Goff) 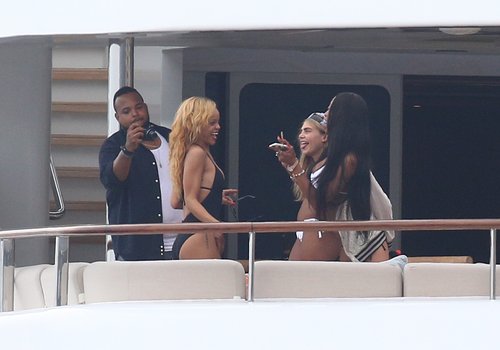 Meanwhile, the singer was also in the UK this weekend as she joined Jay-Z and Justin Timberlake for their opening 'Legends Of The Summer' tour show.

The star was also headlining Saturday night (13th July) at T In The Park Festival 2013.