Pharrell Williams Grammy Awards Hat Sells On eBay For Over $40,000 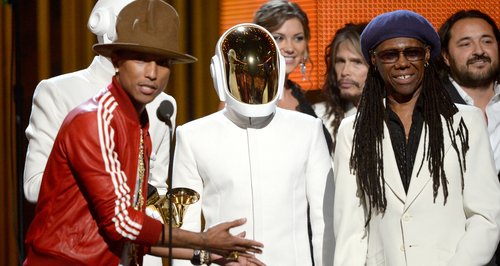 The 'Happy' star has thanked restaurant chain Arby's for their huge bid to win the accessory.

Pharrell Williams' iconic hat from the Grammy Awards 2014 back in January has sold for over $40,000 to a restaurant chain in the US.

The 'Happy' star made headlines across the globe with his eye-catching headwear at the awards show, which was then put up for a charity auction on eBay in late February.

Restaurant chain Arby's has now revealed they are winners of the auction, with their winning bid of $44,100, after joking that the accessory looks remarkable similar to their own logo image.

> What was under Pharrell's Grammys hat?

"Thank you to whoever bought my Grammy hat on @eBay for $44,100. Your donation benefits From One Hand To AnOTHER," Pharrell posted after the auction ended on Sunday evening (2nd March).

".@Pharrell You're welcome. We're HAPPY to support a great cause & get our hat back. Good luck at the #Oscars tonight!" Arby's official Twitter feed later responded, alongside a picture of their winning big screen.

.@Pharrell You're welcome. We're HAPPY to support a great cause & get our hat back. Good luck at the #Oscars tonight! pic.twitter.com/2oA7qDPX9z

Pharrell Williams performed his hit single 'Happy' at the Oscars 2014 but missed out on a win for Best Original Song.