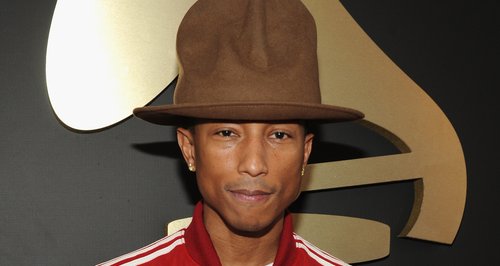 The 'Happy' star's famous accessory from this year's show could be yours for the right price.

Pharrell has put his famous Grammy's hat up for sale on Ebay this week.

The star's Vivienne Westwood "Mountain" hat was one of the most talked about moments from the ceremony and is already fetching bids of $10,500.

He said: "I'm auctioning off my hat from the Grammys to benefit From One Hand to AnOTHER."

He then also joked that US restaurant group Arby's could now buy it back – a reference to the similarities of the company's logo.

The auction ends on 2nd March so now's the time to break open those piggy banks and grab one of the must-have items of 2014.

Fear not though, he also has it in grey – as worn on stage at the BRIT Awards this week during his performance with Nile Rodgers.

Meanwhile, Pharrell also announced details of his new studio album this week – which will be released on 3rd March.

> What Was Under Pharrell's Hat? Four Grammy-Inspired Styles We Reckon He Was Hiding