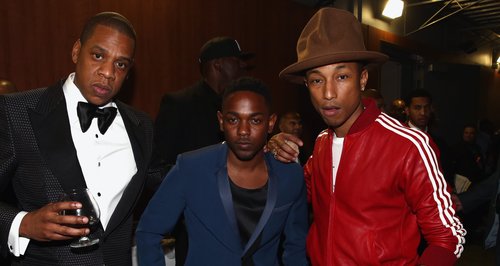 The 'Get Lucky' singer's performance and award wins were overshadowed by his amazing fashion accessory.

The 'Happy' singer turned up to the prestigious awards show rocking an oversized mountie-style fedora hat which quickly made waves across the Internet and even earned itself it's own dedicated Twitter account.

Check out a close-up (amazing) shot of Pharrell with his now world-famous hat below! (Getty):

The account @Pharrellhat launched during the show and already has 13,000 followers, while all anyone seemed to be talking about was Pharrell's statement fashion accessory.

I want a pharrell hat goddammit

@Pharrellhat Pharrell's hat has more twitter followers than me.. I give up

Aside from breaking the Internet in half with his unique hat, the rest of Pharrell's night at the Grammys was just as successful, with him taking home four award in total, three for his Daft Punk team-up 'Get Lucky' and one for Producer Of The Year.

The US star also performed live at the event alongside Daft Punk, Steve Wonders and Nile Rodgers in one of the highlight moments of this year's show.

> Check out ALL of the best performances from the Grammy Awards!