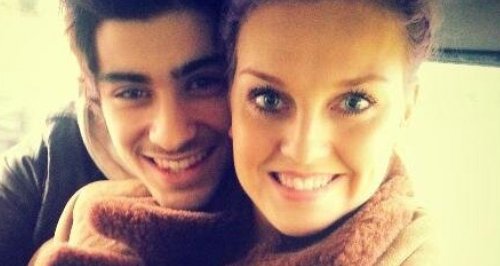 Watch as Capital congratulates the boy band star on today's news that he is engaged to girlfriend Perrie.

One Direction's Zayn Malik was presented with a bunch of flowers this afternoon (21th August) to congratulate him on news he and Little Mix's Perrie Edwards are engaged.

Rumours first emerged earlier today after Perrie was spotted showing off a glamorous new ring at the This Is Us 3D world premiere in London last night (20th August), and the Little Mix star's brother also tweeted confirmation earlier today.

Zayn and the rest of One Direction were being interviewed by Capital FM presenter Max this afternoon when he accepted a special gift to mark the occasion.

"Thank you very much!" Zayn simply said when presented with the flowers, before jokingly lying that they were the couple's first gift since the engagement. "We're really happy, and it's cool."

One Direction were greeted by hundreds of their biggest fans in Leicester Square on Tuesday evening for the huge premiere of their 3D concert movie, with the likes of JLS, Little Mix, McFly and Simon Cowell all stepping out to mark the occasion.

This week 'Best Song Ever' singer Zayn also opened up about getting a tattoo in the likeness of Perrie earlier this year, saying he doesn't mind being though of as the "crazy" member of One Direction.

Watch Capital FM's Max congratulating Zayn Malik on new of the engagement below:

You can hear the full interview of Max chatting to One Direction this Sunday from 7pm on Capital.