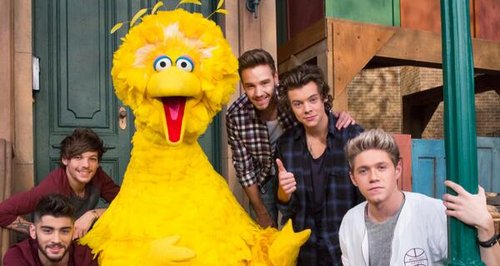 The 'What Makes You Beautiful' stars will appear in an upcoming episode of the hit Children's show.

One Direction can be seen posing alongside Big Bird following their filmed appearance on Sesame Street.

The 'Live While We're Young' stars will be seen on-screen in an up-coming episode of the PBS children's show – which was teased on Twitter this week.

"Guess who's 1D's "biggest" fan? (And thanks for visiting Sesame Street, @onedirection!" the show tweeted to break the news.

Good friend of the group, Ed Sheeran was also recently seen with the cast of the show for his own appearance – which is expected to air in early 2014.

Meanwhile, One Direction were also in Italy this week as they headed to The X Factor for a performance on the show.

The band recently concluded their 'Take Me Home' world tour but are busy preparing for next summer's first ever stadium outing.