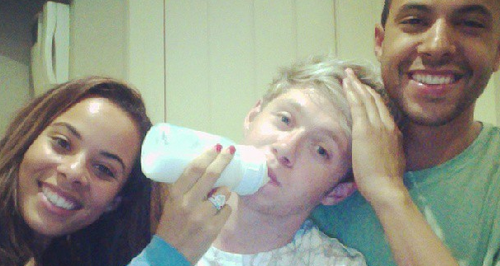 The trio also posed for a comedy picture while getting to catch up back in London.

One Direction star Niall Horan stopped by Marvin Humes and Rochelle Wiseman's home in London this week to pay a visit to baby Alaia-Mai.

The 'Little Things' singer also posed for a light-hearted snap with the Capital FM presenter and his pop star wife as the two held a baby bottle up to his mouth.

"@MarvinHumes and I doing the night feed ;) @NiallOfficial," Rochelle tweeted last night alongside the funny snap, while Marvin posted: "@NiallOfficial @RochelleTheSats great to see you lad and thanks for Alaia-Mai's gift!

"Really good laugh last night with @RochelleTheSats and @MarvinHumes, finally got around before Alaia-Mai's bedtime and met the little cutie," Niall himself tweeted.

The One Direction star returned to the UK this week following the end of the North American leg of the band's 'Take Me Home' world tour, and can now enjoy a short break before the premiere of their film This Is Us 3D next week.

Keep it Capital every Friday and Saturday to tune in to Marvin Humes' show from 7pm.