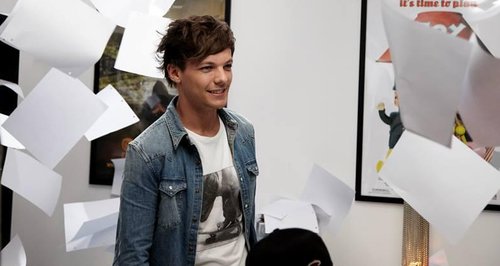 The 'Live While We're Young' singer is seen dressed in his normal clothes in contrast to his bandmates.

One Direction's Louis Tomlinson is seen in the latest preview pictures from the band's new music video for 'Best Song Ever'.

Over the past few days One Direction stars Harry Styles, Liam Payne and Niall Horan have all been seen dressed up as unique characters for the new video, each wearing a variety of wigs, outfits and different hairstyles.

Band member Louis is seen in today's teaser picture but is dressed in a relatively normal outfit of a white logo t-shirt and blue denim jacket.

Happy Friday! You know who else is happy...? See the chap below in action at 6pm in #BestSongEverTrailer4... 1DHQ x" One Direction tweeted earlier today.

This evening will see 'Best Song Ever' be given its first play on Capital FM so be sure to tune in at 4pm to hear the single for the very first time.

View a picture of Harry Styles in costume below:

One Direction release Best Song Ever' as the lead single from their new album on 22nd July.