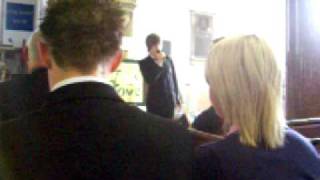 Watch the One Direction star performing covers of 'I'm Yours' and 'Your Song' in his high school days.

One Direction star Liam Payne is seen showing off his budding vocal talents almost five years ago in a new video that's emerged of him performing back in school.

The 'Midnight Memories' singer is suited and booted in the video of his leaver's dance at St. Peter's School during his days in year 11, as he treats his schoolmates to a performance of Jason Myraz's hit 'I'm Yours'.

In a separate video from the same event the 1D superstar performs a duet of Elton John's classic 'Your Song', showcasing his future boy band talents for all to see.

One Direction are currently taking their 'Where We Are' stadium tour across South America, which arrives in the UK this summer.