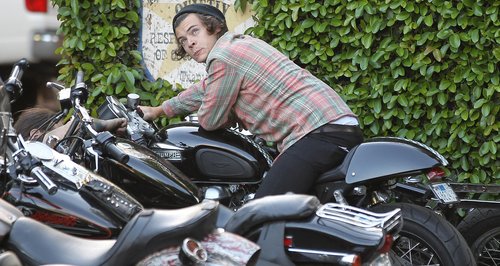 The One Direction star had to hitch a ride back to Hollywood after his wheels let him down.

One Direction star Harry Styles was left stranded in Los Angeles this week after his motorbike broke down.

The 'What Makes You Beautiful' star was out on his chopper but was forced to call for help from the pavement when his ride failed to cooperate. (Picture above: Flynet)

He was also seen attempting to keep his identify sealed by keeping his helmet on as paparazzi came lurking around.

A roadside recovery vehicle soon came along though and helped him get back to West Hollywood.

Meanwhile, Harry has been telling fans how much he can't wait to get back on the road with the rest of One Direction for their 'Where We Are' world tour.