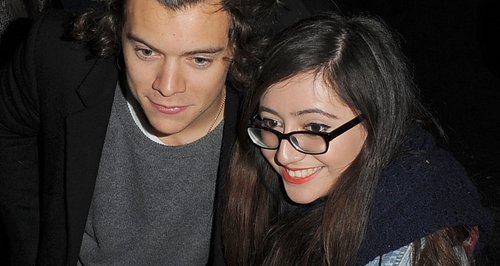 The 'Best Song Ever' star is hoping to meet some of his favourite Corrie characters on the set visit.

One Direction star Harry Styles is set to head over to the Rovers Return soon for a visit to the Coronation Street set to fulfil a "lifelong ambition".

The 'Midnight Memories' star is said to have got his mum to a book a visit to the UK soap's old set, where he his hoping to bump in to cast members like Michelle Keegan for his trip.

"It's always been a lifelong ambition for him to walk along the cobbles and then have a pint in the Rovers Return with some of the cast," a source close to the show told the Daily Star.

> Find out who 1D star Niall Horan has been writing with this week!

"Harry asked his mum Anne to pre-book a visit to the old set as soon as he heard Corrie tours would be taking place," they explained. "He wants it to be a family day out for them and can't wait to see what the Street looks like up close.

"Tina, Gail and David are his favourite characters so he'd love to hang out with them after the show," they added, referring to characters played by Michelle Keegan and Helen Worth. "The crew are really looking forward to him coming down."

One Direction are currently working on songs for their brand new album, as well as kicking off their 'Where We Are' stadium tour in the coming months.