The 'One Thing' stars have recruited the help of the Conservative politician for their new promo.

Prime Minister David Cameron will appear in One Direction's upcoming music video to their new Vodafone Big Top 40 number one single 'One Way Or Another'.

The 'What Makes You Beautiful' stars filmed the special cameo last year upon a visit to 10 Downing Street.

The Conservative leader took to his Twitter account to post a picture of himself with the group and said he was thrilled to be involved with the video.

He tweeted: "Enjoyed my cameo in @onedirection's vid for @comicrelief charity single. Glad to help with the filming location!"

Check out a picture of One Direction hugging the UK prime minister during their visit below:

It has also been revealed this week that the decision for the group to record the Blondie cover for their Red Nose Day charity single was the idea of music mogul Simon Cowell. 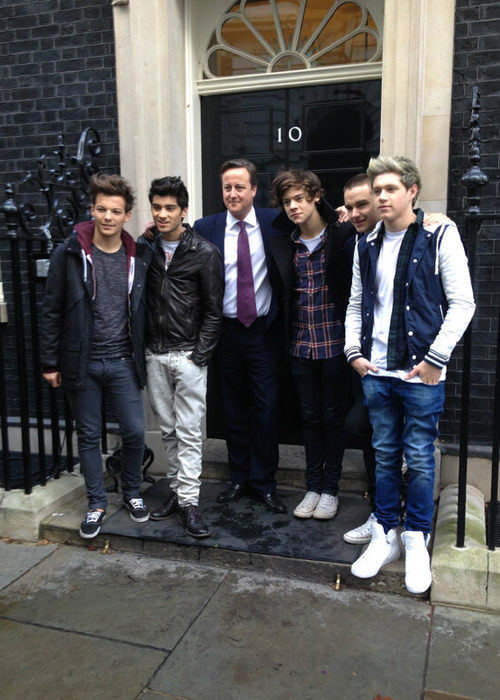 "It was Simon Cowell that came up with the idea and because obviously it's a really cheeky song and it's very fun and also it was very unexpected," the song's producer Julian Bunetta told MTV News. "And I think that he wanted to do something that was out of the ordinary that people wouldn't expect.

Meanwhile, the band are set to perform the new single during their appearance on stage at the BRIT Awards 2013 this week.