The 'Little Things' stars were honoured for their achievements across the pond over the past 12 months.

One Direction have been named the recipients of the first ever BRITs Global Success prize at tonight's (20th February) BRIT Awards 2013.

The 'What Makes You Beautiful' stars beat Adele and Mumford & Sons to win the prize on the night at the event inside London's O2 Arena.

"This really is absolutely mind-blowing," announced singer Louis Tomlinson as the group accepted the award.

"Thank you to our incredible fans who've been unbelievable for us," he added.

Liam Payne also took a moment to thank the group's management and family who've continued to support the band over the years.

"This is absolutely amazing," he added.

The prize was presented by Robbie Williams, "a man who knows a thing or two about global success" – in the words of host James Corden.

One Direction also performed their new charity single 'One Way Or Another' earlier in the night. 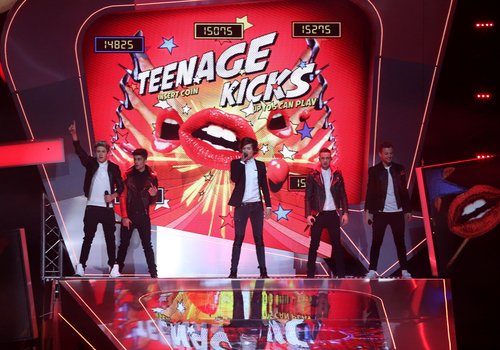 You can check out a full list of the winners of this year's BRIT Awards 2013 here.