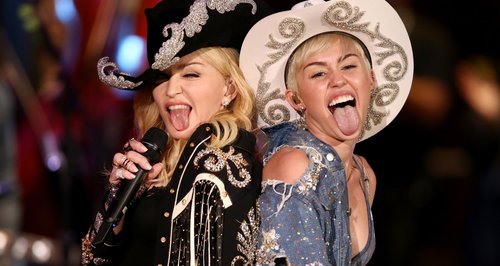 The 'Music' star joined Miley on stage for her Unplugged concert this week for a duet.

Miley Cyrus and Madonna's much-talked about duet aired on the 'Adore You' star's MTV Unplugged special last night (29th January), as the two performed a mash-up of two of their biggest hits.

The US stars performed a re-working of Miley's 'We Can't Stop' and Madonna's 'Don't Tell Me', while both dressed in cowboy outfits, and fans were quick to praise the team-up on Twitter.

Miley and Madonna collab? OMGYES. This I can get behind.

I need Madonna and Miley in my life.

The two teased their team-up earlier this week, while Miley also performed a number of other hits for the TV special, including a cover of Dolly Parton's 'Jolene'.

Miley Cyrus brings her 'Bangerz' world tour to the UK in May.