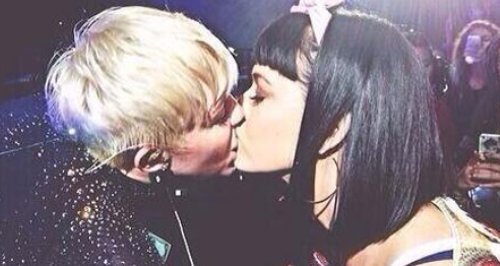 The 'We Can't Stop' star beckoned Katy over for a quick kiss from the front row of her tour show.

'Roar' star Katy was on the front row for Miley's latest world tour show in LA, and Miley beckoned her over for a smooch during her performance of 'Adore You' during the show.

"I just kissed a girl and I really liked it a lot!" Miley announced the crowd after her kiss with the 'Dark Horse' singer.

Katy soon posted a snap of the pair's smooch on her Twitter account after enjoying the show, telling Miley she "adores" her.

Miley Cyrus brings her 'Bangerz' world tour over to the UK starting from 6th May.