As celeb fights go, this is one we didn't think we'd ever actually see, but hey, that doesn't mean we're not going to sit and watch the whole saga unfold with a box of popcorn and a (diet) coke.

It began with Miley Cyrus praising her brother Braison for bossing his very first catwalk show for the iconic fashion brand Dolce & Gabbana. She captioned her post with an endless stream of compliments before ending with this message to D&G...

"PS D&G, I STRONGLY disagree with your politics.... but I do support your company's effort to celebrate young artists & give them the platform to shine their light for all to see!"

Congrats @braisonccyrus on walking in your 1st runway show.... It's never been my little brothers dream to be a model as HE is one of the most talented musicians my ears have ever been given the gift of hearing.... BUT it is a Cyrus family trait to try everything once (within reason HA) and to embrace opportunities that encourage you to step out of your comfort zone! We believe in trying something new everyday! I love you Prince Suga Bear and seriously congratulations on your experience! I am so proud of you always.... From Nashville to Italy! PS D&G, I STRONGLY disagree with your politics.... but I do support your company's effort to celebrate young artists & give them the platform to shine their light for all to see!

Now, that's not exactly the most scandalous and hard hitting headline, however Stefano Gabbana replied with his own Insta post stating...

"We are Italian and we don't care about politics and mostly neither about the American one! We make dresses and if you think about doing politics with a post it's simply ignorant. We don't need your posts or comments so next time please ignore us!!"

You'd think that would be the end of it...but my oh my would you be wrong. Stefano poked fun at Miley's single 'Malibu' with an Insta story post: 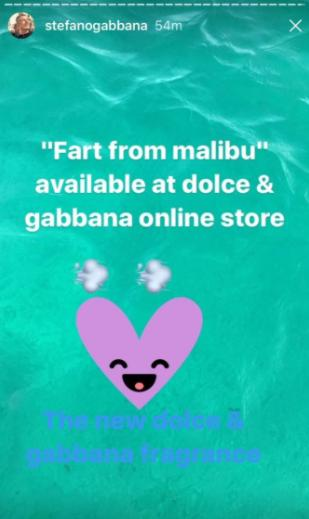 In fact, the fashion house seem to have become so incensed over Miley's comments that they've even vowed never to work with poor Braison ever again!

Well...we're pretty sure Miley's not feeling too happy rn BUT you have to see her rocking out with Pharrell whilst singing 'Happy' back at #OneLoveManchester.