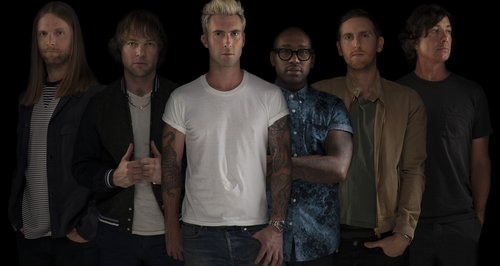 Maroon 5 are back with a new album, complete with neon artwork. Swish!

Maroon 5’s fifth studio album, ‘V’, is one of the most eagerly anticipated albums of the year, and the band have finally released the track listing and cover artwork.

The lead track from the album is the recently released ‘Maps’ and the full record includes 11 tracks and three B-sides.

The boys have been in the studio with Gwen Stefani for ‘My Heart Is Opened’ which was written by the musical hit machine, Sia.

Maroon 5 have announced the tracklisting + album art for their new album, #V. Read it here-http://t.co/KFGrQK9yuC pic.twitter.com/XR77D0IJ3w

James Valentine told Billboard, “It's cool for all of us to have Gwen on the record, and Adam won't shut up about how cool she is as a person."

The album drops on the 2nd September, so fans still have a little while to wait before they can get their hands on the neon goodness.